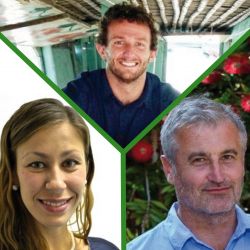 Sonja Ayeb-Karlsson researches (im)mobility decisions in the context of environmental stress and livelihood sustainability in Bangladesh at University of Sussex and UNU-EHS. Her research primarily emphasises on storytelling methodology and the development of anthropological approaches to interact with people facing environmental stress. Christopher D. Smith is a research fellow in Geography in the School of Global Studies. His research primarily focuses on the interactions between environmental change, migration decision-making, and livelihoods in numerous contexts worldwide. Dominic Kniveton is Professor of Climate Change and Society at the University of Sussex. Originally focusing on the science and modelling of climate change, his work encompasses studies of impact, vulnerability, adaptation, and climate resilience.

First appearing in the Foresight Migration and Global Environmental Change report released in 2011, the concept of Trapped Populations [1] expanded the study of human responses to environmental and climate change impacts by examining how people although with a desire to move may be unable to escape environmentally risky locations. The seemingly straightforward concept has been widely used and applied within academia and policy without much critical elaboration around its underlying discourses. At the same time, the potential influence the language describing the concept may have upon vulnerable populations determined as ‘trapped’ is also being neglected.

In a critical discourse analysis, my co-authors and I review the textual use of academic literature referring to ‘trapped’ within environmental migration studies to understand why the concept appeared when it did and how it has been shaped to date as well as examining the potential of misusing the concept in its current form.

While the UK Government commissioned a report on how people will move in the future due to climate change impacts, the biggest finding was around not being able to migrate. So-called ‘trapped’ populations were seen as a potential negative outcome in the face of a climate changed future, with possible humanitarian consequences.

A new word entered the vocabulary of environmental migration scholars but without much caution around its potential policy effects.

The concept of Trapped Populations is spoken of in fragmented ways within the academic literature.

The power effects of language are of particular importance within policy. To give an example, the inclusion of ‘displacement, migration and planned relocation in regards to climate change’ through §14f in the 2010 UNFCCC Cancun Agreements marked a unique linguistic breaking point in how migration was framed in relation to climate change. We suddenly observed how resettlement entered the storyline of how to protect the most vulnerable populations from the future threats of climate change. Our discursive review, however, finds that the concept of Trapped Populations may not have had as much resonance in policy discourses and is spoken of in fragmented ways within the academic literature.

The publications contributing to Discourse A do so in different ways. Three articles authored solely by Lead Expert Group members refer to ‘trapped’ in a manner much in line with the the original Foresight description, where ‘trapped’ populations are portrayed as a future critical risk needing to be solved by supporting people to migrate, an action representing a well-documented way to effective(ly) adapt.

Questions of why people will become ‘trapped’ are strongly narrated around economic language where immobility is cause(d) by people losing their assets, falling into poverty traps, or suffering from a lack of capital. Vulnerability is also linked to wealth so that ‘trapped’ populations are seen as being vulnerable without the ability or resources to move.

Discourse B builds on and expands the Foresight report definition in a few key ways:

(1) instead of being rendered immobile in environmental high-risk areas, people are described as trapped within states, e.g. trapped in their own countries or in transit countries and due to border security;

(2) people are narrated as trapped in situations rather than geographic areas;

(3) instead of lacking economic resources, focus is on affected peoples’ lack of legal protection frameworks; and

(4) the role of environmental change has been reduced so that those ‘trapped’ include people displaced due to conflicts and economic migrants moving towards large(r), richer cities and states, such as towards the EU.

Discourse C cautions against ‘migration as adaptation’ since it may serve to justify the promotion of a new circulation of capital and labor while appearing to be advocating a policy of open borders. At the same time, it can obscure and conceal racial management and define or stipulate ‘maladaptive’ migration.

Where do ‘trapped’ populations go from here in the policy sphere?

Climate policy recommending relocation or resettlement must incorporate the incredibly complex and sensitive nature of the process and acknowledge the power that may underlie its use.

Proactive climate action such as assisted migration, relocation, and resettlement may be promoted as an effective solution for ‘trapped’ populations, although migration scholars have already warned of potential footprints upon migrant agency and governance.

These proactive forms of policy recommendations would require extreme caution to ensure that they preserve the autonomy of affected people. In situations where immobility is involuntary, assisted migration may be welcomed; however, where immobility is voluntary it will represent an imposition into people’s lives and their choices to stay in seemingly risky locations. Climate policy recommending relocation or resettlement must incorporate the incredibly complex and sensitive nature of the process and acknowledge the power that may underlie its use.

Although the concept of Trapped Populations has been described and interpreted in numerous ways, the conceptual idea is still developing and its current fragmented form (conceptually, theoretically, and practically) has created potentially dangerous policy tools that risk being misused to seemingly protect, save or move vulnerable populations, while ensuring political or economic gain.

"The power contained within language should not be overlooked." |NEW BLOG on #TrappedPopulations as Concept and #Policy Tool @TransReProject

Our methodological approach is intended to remind us that language and knowledge are flexible and transformative according to social structures. The power contained within language should therefore not be overlooked, and especially not in relation to describing someone as ‘trapped’. Labelling a person as ‘trapped’ has a similar potential as labelling someone as ‘sick’ – such a label may reduce or remove an individual’s agency and independence in determining their own destiny.

Baldwin, A. 2016. Premediation and white affect: climate change and migration in critical perspective. Transactions of the Institute of British Geographers 41: 78–90. https://doi.org/10.1111/tran.12106

Foucault, M. 1981. The order of discourse. In Untying the text: A post-structuralist reader, trans. I. McLeod. London: Routledge.