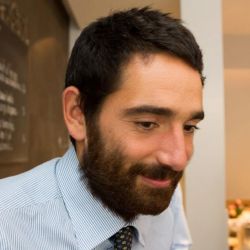 Lorenzo currently works with the International Organization for Migration on disaster risk reduction, dealing with a mix of project development and support, capacity building, advocacy, and policy activities. Previously, he has worked with the knowledge management unit of the UN Office for Disaster Risk Reduction and with the International Union for the Conservation of Nature on ecosystem-based climate change adaptation. He holds a law degree and a PhD in sociology.

Migration and Disaster Risk Reduction in the Sendai Framework

In March 2015, in Sendai, Japan, 187 States approved the new global framework on Disaster Risk Reduction (SFDRR) – a list of objectives, priorities and principles, to guide all efforts to reduce the impacts of hazards over the next 15 years. The SFDRR looks at human mobility as a dynamic of disaster risk and risk reduction, a view that is more nuanced (and hopefully more productive) than its predecessor - the Hyogo Framework for Action.

That migrants might often be among the worst affected in disasters has been mentioned a number of times in the discussions that have resulted in the framework. The SFDRR also points to mobility as a potential driver of risk, both for those moving, and for those who are affected by the effects of other people's movement – think for instance migration contributing to rapid, unregulated urbanization and resulting in the establishment of settlements of unsafe houses in hazard-prone sites. But the framework also stresses that migration has a positive potential for risk reduction and resilience building, and that migrants have unique experiences and capacities that can (and should) be leveraged for reducing disaster risk (paragraph 36.a.vi.).

This last reference, in particular, is the result of lengthy discussions throughout the Conference's preparatory process – with a number of States asking for more clarity on the ways in which migrants contribute to risk reduction.

The simple text that ended up being approved suggests that both home and host societies benefit from migration, and that such benefits can be the outcome of both internal and international migration.

The key idea behind the reference is that migrants help connect places and communities and facilitate transfers of a diversity of resources and knowledge – and that this diversity has an intrinsic resilience value. The text does not single out remittances, and instead points to all practices, awareness, ideas, and material or immaterial resources that can expand the tools available to societies and communities to reduce the impacts of hazards.

Both home and host societies benefit from #migration #blog @TransReProject

"Including migrants in DRR efforts" can be achieved through a variety of actions, by different actors, and in different places.

It means considering needs and capacities of migrants when planning for disaster prevention actions, early warning, evacuations and recovery, and actively involving them in disaster risk management systems. It means thinking about migrants' presence and movement when planning how our cities will develop and how they will be governed and how accessible opportunities and basic services will be. But it also means using migrants' skills, knowledge, and networks to support investments and decisions that can help reduce risk, and facilitating population movements and resource transfers from and into areas at risk or affected by disasters to build people's resilience before disaster and support recovery after they have taken place.

The SFDRR does not include explicit references to the need to create conditions for safe mobility choices that do not result in increased risks for people moving, and those staying in their home and host communities.

...using migrants' skills, knowledge, and networks to [...] reduce risk [...], to build people's resilience before disaster and [to] support recovery after they have taken place" is important for disaster risk management.

It does not explicitly call for an improved understanding of how moving shapes vulnerability and losses to disasters. However, and despite the political sensitivities that are often associated with human mobility issues, it clearly recognizes that moving can be a well-being and resilience option - and articulates the idea in quite some detail, for such a high-level document.

The SFDRR is non-legally binding: even the quantifiable objectives it includes are not hard commitments to the countries that have signed it. However, it does express political priorities everybody agrees upon, and represents one of the building blocks of the new global policy structure through which future development and humanitarian work will be designed and measured. To what extent the Sendai framework will actually influence DRR efforts, and more in general, decisions of policy-makers, local authorities, businesses, and citizens on a variety of topics, ranging from natural resource management and tourism to education and taxation, remains to be seen.

Work now should go into translating into practice the provisions of the framework: over the next decades, and better integration of human mobility issues in disaster risk reduction efforts clearly will be one of the conditions to promote the well-being and security of people and communities all around the world.