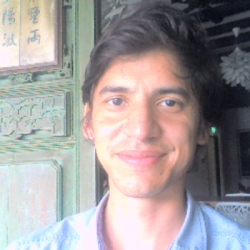 Patrick Sakdapolrak is a research group leader at the University of Bonn, where he is currently heading two research projects on the migration-environment nexus. He holds a PhD in Geography from Bonn. His research is concerned with the question of how vulnerable groups live with risk. He has conducted empirical research in Thailand, India, and Kenya. CONTACT psakdapo@uni-bonn.de

What is going on in research on migration and environment? The German Congress for Geography gave insight on the state of the art research activities of geographers from Germany, Austria, and Switzerland in Berlin this past October.

Two panels addressed research on migration and environment directly. The first panel “Environmental change and migration. Time for a regionalised perspective” (Umweltwandel und Migration – Zeit für eine regionalisierte Perspektive)“ hosted by Johannes Herbeck (Uni Bremen) and Felicitas Hillmann (FU-Berlin) called for the contextualization of environmental migration in regional settings. Using the region as a starting point for the analysis and by systematically addressing the regional specific physical, political, social, and cultural dimension provides a way to improve our understanding of the impact of migration on the environment. Bernhard Martin’s (Uni Mainz) paper on Senegal highlighted the need to address the historical evolvement of regional formations. He showed how climate change adaptation needs to be seen in the context of agrarian change and how these interactions influenced the local perception on risks of climate change and thus also the decision to migrate. Lisa-Michell Bott (Uni Cologne) presented a paper on the perception of stakeholders in Pakistan on “migration as adaptation”. Her paper showed that the ongoing international discourse on “migration as adaptation” has not trickled down to the national level as the interlinkage between migration and climate change adaptation is not acknowledged. Usha Ziegelmayer (Leibniz Institut), a member of the VW Foundation-funded interdisciplinary “New Regional Formations” project, presented her empirical research from the high risk coastal area in an urban agglomeration of Java, Indonesia. Despite direct exposure to sea level rise and anthropogenic surface subsidence the decision to out-migrate or to settle near the sea is embedded in the past socio-economic and cultural context and not directly linked to environmental factors. Finally, Silja Klepp (Uni Bremen) presented her work from Kiribati - the “climate change poster child,” as one of her interviewees characterised the island state. She addressed the shift in discourses on climate migration among stake holders in Kiribati and discussed different strategies, such as “migration with dignity” and the purchase of “save” land for potential relocation in Fiji.

The second panel with the title “Environmental change and migration. New perspectives on a on multi-layered phenomenon”, hosted by Clemens Greiner (Uni Cologne) and me, gathered case studies on translocal approaches at the environment-migration nexus. A translocal approach helps to shift the attention away from the question of how environmental stress leads to migration flows by putting the complex feedback processes in the relationship between migration and the environment into focus. The panel started with a contribution by Harald Sterly (Uni Bonn) who presented the concept of the recently published edited book “Environmental change, adaptation and migration in complex regional realities” and addressed the pitfalls in researching environmental migration. Vera Tolo (Uni Bonn) presented the role of translocal linkages for land use change in Western Kenya. Based on a multi-sited ethnographic approach, she highlighted local embeddedness in the places of destination and the effects on land use change in the places of origins of migrants. Till Rockenbauch (Uni Bonn) presented his conceptual and methodological approach to decipher the relationship between social networks and resilience towards environmental risks. If we want to gain a better understanding of the relationship – he argued – we need to move beyond a metaphoric notion of networks and explore the potential of social network analysis in research on migration and the environment. The panel ended with a paper from Christiane Naumann’s (Uni Cologne) work in South Africa. She elaborated on the investment decisions of mine workers and explained their investment in livestock despite the associated risks (drought, theft) and implications for land degradation.

With a strong focus on perceptions and local rationalities as well as embeddedness in translocal relations and regional formations, the contributions were an expression of the ongoing “third wave of research on migration-environment”.